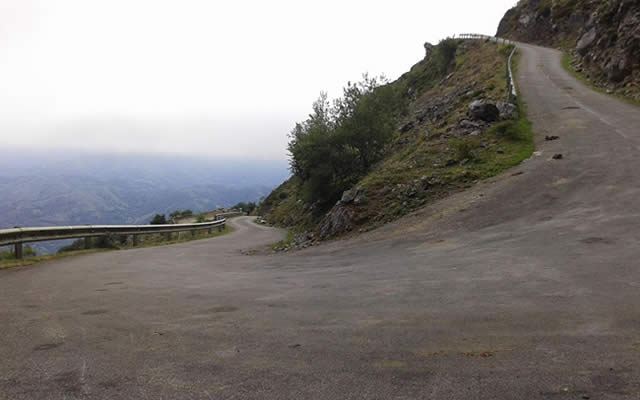 One of the most fearsome climbs in Cycling, considered harder than the Monte Zoncolan in Italy or Alpe d'Huez in France. The Angliru is only 12.5km long and 1570metres high, but with an average gradient of 10% and maximum pitches at 24%, it is truly brutal.

Located in Spain's north-western Picos de Europa mountain range, with views over the Atlantic Ocean and over the city of Oviedo. The Angliru only featured in the Vuelta for the first time in 1999 to some debate as to whether it was too hard or not.

The stage went ahead none the less and was won by Jose Maria Jimenez (Banesto) after catching and attacking Pavel Tonkov (Mapei) in the dense fog. 2002 saw the return of the Angliru to the Vuelta and again, there was a lot of controversy about the difficult of the climb. The stage took place in the rain which saw cars stalling on the steep gradient and riders falling over, unable to remount their bikes.

Most notably, David Millar who was sitting in 9th overall, had crashed three times while climbing the Angliru and famously abandoned the race just before the finish line in protest to the climb's brutality. Roberto Heras still holds the record time on the climb of 41:55mins, set in 2000 riding for Kelme. Probably fuelled by more than just porridge and energy gels...