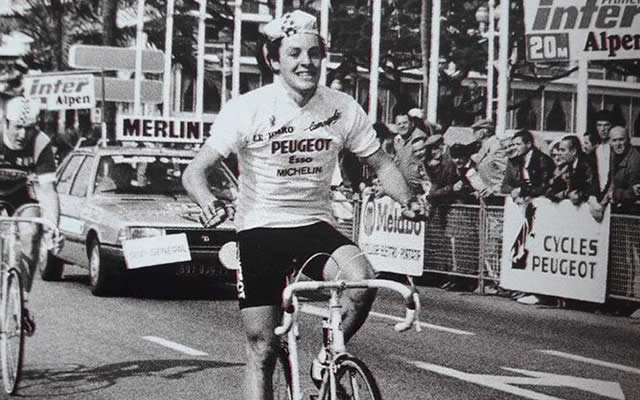 The race jersey shown is Stephen Roche’s 1981 Paris Nice actual race winners jersey. I was very fortunate back in 1982 to meet Stephen at a local bike show, having spent the entire 2 days at the show as a young 17 year old cycling fanatic, I had been drooling over Stephen’s team Peugeot bike and other team issue items.

Back then cycling had very poor media coverage and to see anything from a professional team was like gold dust and a bit surreal. The bike was for sale but it may as well have been selling for one million pounds as I knew I never could have afforded it.

On the second day of the show Stephen asked about the possibility of a ride out the next morning with a few locals, this had been arranged and the chosen few were all very excited about the prospect. I had to ride to the show that day. As darkness had descended that evening and knowing I only had the old practically useless Ever Ready lights, I needed to go home.

At this point Stephen told me to wait a moment and he disappeared. He returned with a jersey in his hand and said it was for me, the jersey was folded up and I assumed it was his Peugeot team jersey but when I held it up I realised it was his winners jersey from that years Paris Nice. Back then the leaders jersey was always standard and the team sponsors were displayed, simply, as a stick on patch.

This year is the 40th anniversary of Stephen’s win at Paris-Nice. I have always cherished this jersey and have never forgotten its significance in the early stages of Stephen’s career.